My city Allahabad- A Sneak Peak

http://www.slideshare.net/varni46/heritage-of-allahabad
The Sangam Nagri
Do view this and add on whatever you feel I have missed, and if the city has managed to add something new to talk about. Created by my son Varun Kapoor and his friends when they were in the 7th grade, it could see a few improvements, but for now, this will suffice. 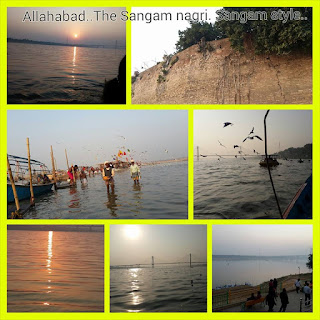 Posted by Varnika Kapoor at 10:25 PM No comments:

http://fuseoff.blogspot.in/
A post on one of my travels long back. Written in 2013, I am posting it here unedited. 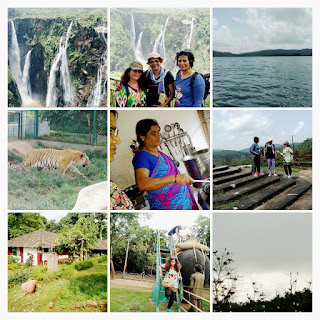 It all starts with wanting to travel, and see places, meet people, and be with yourself and nature. Courtesy F5 Escapes , we set out in the peak of the rainy season, 19th to the 21st of August. A good time to be here, as the dams release their water, and the Jogupalya falls plunge down in their full force. Its a sight worth keeping in the archives of the brain, and bring it forth when you need to remember natures bounty , its beauty and strength. The Inchara Homestay , in Thirthahalli taluk of the Shimoga district, is a very conventional, old fashioned house, its beauty maintained very well by the owners residing there. 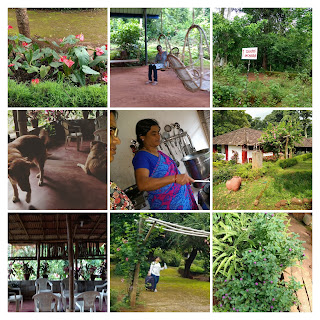 Old fashioned, does not mean inconvenience of any sort. The hosts are hospitable, and also the food, very local, digestible, and tasty, cooked by smiling happy ladies was a delight. The Tunga dam close by was our first stop, after savouring the delicious food, and the homestay. The usual, dam and water, but amongst beautiful green surroundings. 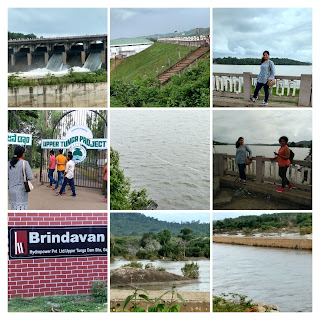 GAJANUR DAM
Beautiful place to spend an evening, with friends and food. In the middle of the tungabhadra river, there were very dry trees, which got me very puzzled initially. But got to know from the local people there, that the area is marshy, less of air for the plants to breathe, so they have dried out. It still gets me completely bamboozled though.The  greens, and then this dried out vegetation gave me the creeps initially. I visualised some horror movies being filmed there, or something like crocodile dundee...Movie buffs could create a story there to scare the wits out of people. 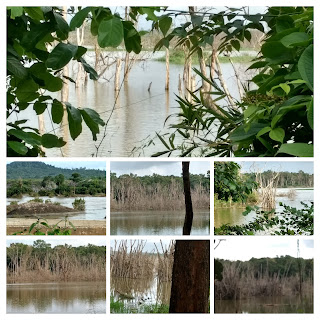 THE DRY N THE GREEN
The next day, it was the Elephant Sanctuary in Sakrebylu. Run by experts, the healthy elephants, their babies, parents and grandparents were an interesting sight. For me, petting an elephant, and being blessed by its snout, was so unusual.  The ride on this majestic animal was kind of cool, but then, the nagging feeling that these animals need to be in the jungle and in the wild kept worrying my brain. The caretakers told us that they bathe them, feed them and then send them back to the jungle only to be brought back. Still..... 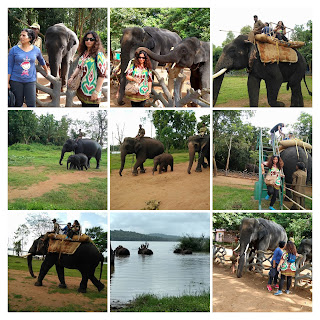 And then to the mesmerising Jog falls. They are four or five streams of the Sharavati river, plunging down. Called the Roarer, Rocket, Raja and Rani. How romantic!!. The rains this year, in this part of the country have been about 50 to 60 percent, as per the locals there.
The source of Sharavathi River is Ambutheerta in Thirthahalli taluk of Shimoga district in Karnataka state, India. After originating in Western Ghats, Sharavathi flows into disappear in Arabian Sea at Honnavar. It is one of the rivers flowing in west direction. Its breadth widens to an extent of 230’ for sudden fall from 830’, dividing into four scenic cataracts at Jog Falls, being the highest waterfalls in India, to make it world famous, attracting millions of tourists every year.Sharavathi flows via two districts of Karnataka namely Shimoga and Uttara Kannada and empties into the Arabian Sea at Honnavar after flowing in the northwestern direction for more than 100kms.
The regions around Sharavathi are rich in biodiversity and at home to many rare species of flora and fauna.Sharavathi is dammed at Linganamakki. The portion of river above the dam is upstream and remaining portion is downstream. Honnemaradu is an island on the reservoir formed by Linganamakki dam, which is good for water sports, attracting enthusiasts. Canoeing, kayaking and wind surfing are some of the water sports played here. It is interesting to watch colourful birds in this spot. The ride here, on a motor boat,  courtesy Jungle resorts, was breathtakingly panoramic. The falls were a grand sight too.(  The info on Sharavati River taken from trip adviser) 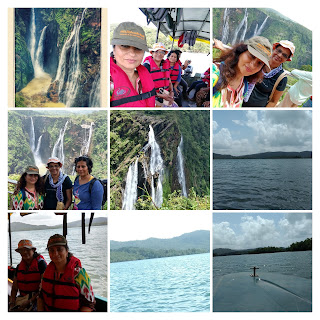 Jog Falls and the ride on the Sharavati river reserve waters
We visited a hanging bridge on our way to the Sharavati River reserve waters. The high point here being that I was greeted by a creepy crawly rustling away in a hurry to probably inform his friends and family that there were intruders in its area..,Crazy moment with me screaming and rushing back to our car. Phew! . 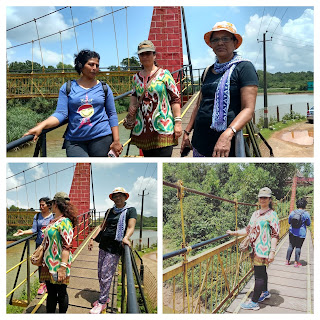 The Hanging Bridge
On the Highway we also stopped at a place called the Raja's Kallu. It was a stone built with different cities of Karnataka written on its sides, which in reality point towards their direction. Interesting piece of engineering. 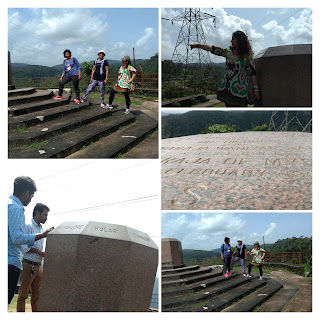 Raja's Kallu
Off to sighting tigers and lions after all of this. Its on the Shimoga Sagar road. The interesting bit of this trip to the Tiger reserve was that the tigers and lions and deer that we saw, were all very healthy and looked well fed. The ferocious eyes and demeanour was not lost by us..The roar of a hungry lion sent chills down our spine. What force, what strength!! 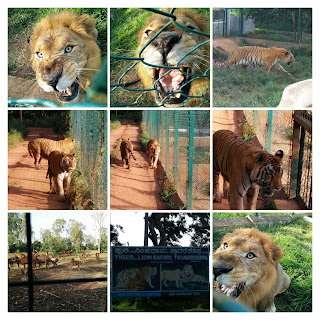 TAVAREKOPPA TIGER RESERVE
And then for some freshly cut Pineapple, and roasted corn on the cob from the Highway. The pineapples were so juicy and yum. A trip worth remembering.
Memories , loads of them, would love to visit it again. 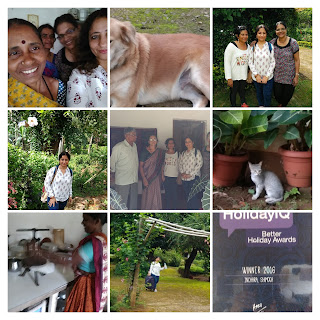 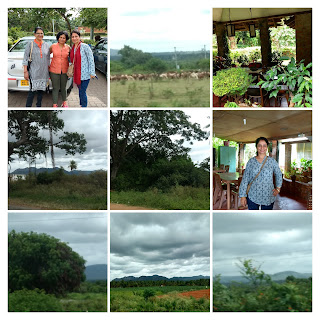 Posted by Varnika Kapoor at 8:43 AM No comments:

Some time in the month of April, a weekend, we decided to travel to Ooty, a beautiful hill station nestled in the Nilgiri hills, in Tamilnadu. Since the decision was a last minute one, we got a place to stay in Coonoor. It is at an elevation of 1850 meters above sea level. To me it seemed greener, quieter and more scenic. The drive to Coonoor itself was wonderful. We passed through the Bandipur National Park in Tamilnadu. A few deers, cheerful, curious monkeys, noisy peacocks were among the fauna we spotted.

Coonoor is known more for its tea production, now a bit on the decline, or so it seemed. We enjoyed the quiet and serene aura of the place. We went to a tea garden and factory to see how it is processed and packed.
We went walking around the little town, an experience in itself, as walking on a hilly terrain, can be a challenging but satisfyingly sweaty task for health freaks. The crisp cool breeze does a lot of healing of the soul.
The drive up to a point called the dolphins nose was a dreamy ride, with a few minutes spent there clicking pictures and enjoying the panoramic view of the whole city. One has to be a wee bit careful of the monkeys around, but by and large they wont trouble you.

The best part of the city was its colourful surroundings, because of the pretty flowers and healthy foliage around. I could not but help capture the insane variety of flowers I saw there. It is so breathtakingly gorgeous.


You get to restore the health of your lungs in such places. Maybe we could have stayed on for a couple of more days, but for now this was a blissful trip, enough for us to want more, and rush back whenever we get the time.

Posted by Varnika Kapoor at 10:24 AM No comments:

“For my part, I travel not to go anywhere, but to go. I travel for travel’s sake. The great affair is to move.” – R L Stevenson

Everyone's journey in life is one that is solo. For my part, it took a while to get this straight in my head. Looking for something to create balance in my life, to calm my turbulent soul, i felt that travel could be my healer, my pathfinder to peace.
So I start this month, August of 2016, releasing fear, and embracing freedom. Let us see how it unfolds. For me, travelling is not really new, being a Merchant Mariners wife, I have travelled around. But I wish to keep it going, to go solo, to explore, to understand life through my travels, meet people and breath free. CODDIWOMPLE , the name I really got attracted to, is a word, from a travel dictionary, which means " To travel in a purposeful manner, towards a vague destination". I wish to release all toxicity, and breath out all that does not serve me well. I wish to live, live free and untamed. I am sure I will love where ever i go, and whatever I see. And so I begin with my jaunt..and set my vagabond spirit free.
I start travelling, the first one being a small trip to Shimoga, Karnataka, India. This is under the guidance of F5 Escapes, http://f5escapes.com/ .
Its a journey to the Jog Falls, the second highest water falls in India. Looking forward to it, and then whip up my next post with pictures and scribbles.  Wish me luck.

Posted by Varnika Kapoor at 1:44 AM No comments:

Varnika Kapoor
The meaning of life is to move on. To no specific destination, Live and understand life by its very essence of surrounding yourself with people and things that help you grow into a better human.